If you have a prospective site, it helps to understand the hydropower fundamentals of head and flow.

Hydropower all comes down to head and flow. The amount of power, and therefore energy that you can generate is proportional to the head and the flow. 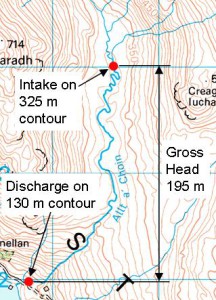 Head is the change in water levels between the hydro intake and the hydro discharge point. It is a vertical height measured in metres. The two diagrams below show how the head would be measured on a typical ‘low head’ and a typical ‘high head’ site. The more head you have the higher the water pressure across the hydro turbine and the more power it will generate. Higher heads are not only better because they generate more power, but also because the higher water pressure means you can force a higher flow rate through a smaller turbine, and because turbine cost is closely related to physical size, higher-head turbines often cost less than their low-head cousins even though they might generate the same power.

The cost of drive train is closely related to how much torque it has to transmit, so higher heads = less torque = less cost. 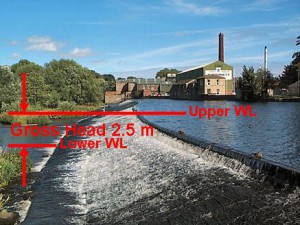 Diagram of measuring head at a low head hydropower site

Of course you only have what you have, so if your site only has 2 ½ metres of head you won’t be able to increase this significantly. However, even small increases in head can make a difference.

Sometimes it is possible to clear silt or re-grade a tailrace or discharge channel to lower the downstream water levels slightly which increases the overall head at the site. Or it may be possible to raise the water level on the upstream side by raising weir crests or sluices, though this must be done carefully to avoid increasing flood risk, and sometimes requires the construction of new spillways or installation of fail-safe tilting weirs to ensure that flood risk isn’t increased during extreme flood events.

Generally speaking the cost of even small increases in head at low-head sites is repaid hundreds of times over from increased energy production for the next few decades, so is always worth the effort.

The flow rate and how it varies over a year is the next and equally important parameter.

The simplest way to characterise the flow in a watercourse is to work out what the long-term annual mean flow is. This is important because it is the overall average flow in a watercourse that is important; it doesn’t matter if it is a raging torrent after heavy rains (all watercourses are…) because in the big scheme of things we only have really heavy rains for a few days or weeks a year, and for the other 50 weeks when it is lightly raining, drizzling or bright summer sunshine you would still want you hydro system to be working and generating energy.

The fundamental piece of information that characterises the flow in a watercourse is the flow duration curve. Although simple once you understand them, they are quite complicated to newcomers. Figure 1 below shows the long-term flow duration curve of a small river in Somerset. 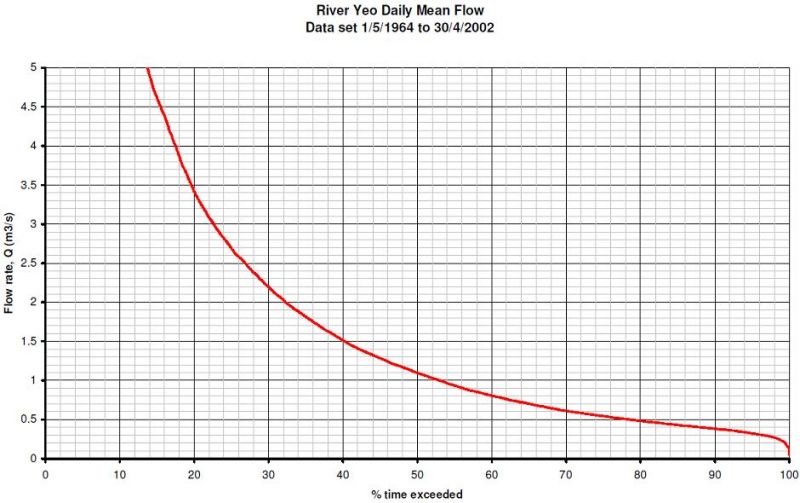 Long-term flow duration curve for the River Yeo in Somerset

The x-axis is always plotted as a percentage exceedence from 0 to 100%. This is so that any data set spanning any interval can be plotted. The data set may span 10 days or more likely several decades of data from a local river gauging station. Generally speaking flow duration curves present long-term annual data, so the flow rates read off them are the annual flow characteristics. The percentage exceedences are often called ‘Q values’, so Q95 is the flow rate exceeded for 95% of a year and Q10 the flow exceeded for 10% of the year. The data set can also be analysed using a spreadsheet to work out the average (arithmetic mean) of all of the flows, and this is called Qmean. In the UK the Qmean is normally somewhere between Q25 and Q30, and in the case of Figure 1 is Q26.5.

Once you understand how a flow duration curve is constructed it can tell you a great deal about the flow characteristics of the water course. Firstly you can work out the Qmean, which is the average flow, and often if you are negotiating with the environmental regulator you will be discussing the Q95 flow, as this is often used as the representative ‘low flow’ that must always flow in any depleted stretches of river while the main volume of water passes through the hydro turbine.

By comparing different Qvalues you can see how ‘flashy’ a watercourse is, or whether it has a high baseflow. The flow duration curve in Figure 1 has a Qmean of 2.54 m3/s and a Q95 of 0.32 m3/s, so the Q95 is 8% of the Qmean. This is typical for a ‘flashy’ river that rises and falls quickly in response to rain because the rain runs straight of the land and into the river without getting stored in bogs or porous rocks before flowing into the river sometime later.

If you make the same comparison using Figure 2, you will see that the Qmean is 11.30 m3/s and the Q95 5.83 m3/s. In this case Q95 is 52% of the Qmean. This would be a ‘high baseflow’ river, typical of the rivers that flow in Hampshire with chalk catchments where the chalk stores the rain in its porous structure and then releases it to the rivers slowly and over a long period of time, rather like a sponge. It is also interesting to note that Qmean is at Q41; much lower on the flow duration curve than a flashy river like in Figure 1. 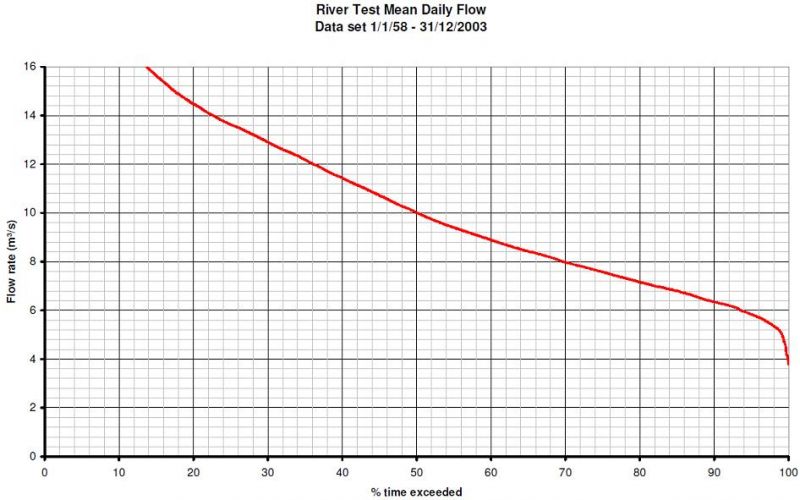 Long-term flow duration curve for the River Test in Hampshire

In both flow duration curves you can see that the red line is heading steeply upwards at the left-hand end of the graph. This is the ‘extreme flow’ region, which is not much use for energy generation because such extreme flows occur for a relatively small proportion of the year, but they are very important when designing a hydropower systems to ensure that the hydro structures and turbine house don’t get flooded, or even worse, washed away during the next major storm!

What is the minimum head and flow required?

The answer to this depends very much on what return on your investment you want.

For a commercially viable site it would normally need to be at least 25 kW maximum power output. For a low-head micro hydropower system you would need at least 2 metres of gross head and an average flow rate of 2.07 m3/s. To put this in context this would be a small river that was approximately 7 metres wide and around 1 metre deep in the middle.

For a site with 25 metres head a much lower average flow rate of 166 litres / second would be needed. This would be a large stream of 2 – 3 metres width and around 400 mm deep in the middle.

It is technically possible to develop smaller hydropower sites with lower power outputs, but the economics start to get challenging. This is particularly true for low-head sites; when the head drops to 1.5 metres it isn’t normally possible to get any kind of return on investment, though the site could still be technically developed using Archimedean screws or modern waterwheels.

The table below shows the average flow rates needed for a range of heads from 2 metres to 100 metres for system with 100, 50, 25, 10 and 5 kW maximum power outputs. 25 kW would normally be considered the minimum for a commercial project, though a 10 kW system can still produce an acceptable return if the civil engineering works are simple (hence don’t cost much). 5 kW systems are not normally viable, but the figures are shown for interest and may be useful for sites that can generate value from non-tangible benefits such as attracting visitors or positive publicity.

Minimum flow rates required for a range of (gross) heads.