How do hydro systems work?

There are lots of different types of hydropower turbines that will work on different combinations of head and flow. Fundamentally all hydro systems work on the same principle of converting the pressure in a head of water into rotary mechanical power, and then use a generator to turn the mechanical power into electricity. 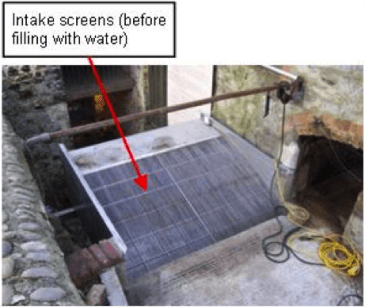 The pictures show a typical low-head micro hydro system with the main parts identified. Although the pictures show tiny systems (less than 10 kW) it is easier to explain the parts on smaller systems because they are all so close together. The basic parts are the same for any hydro system of any size. Working from the upstream-side and working downstream, the first thing the water flows into is the intake. The intake always has a screen which has two important purposes, firstly to prevent debris from entering the hydro system that could block and/or damage the hydro system and secondly to prevent fish from entering the system which could cause them injury.

Once the water has passed through the intake screen it flows through the penstock pipe to the turbine. The penstock is a pressure-pipe, which means that it is 100% full of water and as it moves downwards the water pressure inside the pipe increases as the head increases. 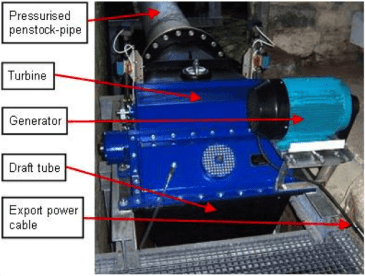 At the end of the penstock pipe is the turbine which has a rotor to turn the high-pressure water into rotational mechanical energy. The turbine discharges the water at the lowest possible level to maximise the head across the system, and normally uses a ‘draft tube’ to do this.

The draft tube a clever device that is full of water, and much like you have to reduce the air pressure inside your mouth to suck water up a straw, by having a column of water inside a draft tube that always wants to fall downwards because of gravity, it creates a negative pressure underneath the turbine. This is called ‘suction head’ because it is a negative pressure, whereas the pressure in the penstock is positive and called ‘pressure head’. Draft tubes don’t mean you can get more head from a site, but they do allow you to physically locate the turbine up above the downstream water level, which can make it much easier to construct and maintain because it won’t be in such a wet environment. 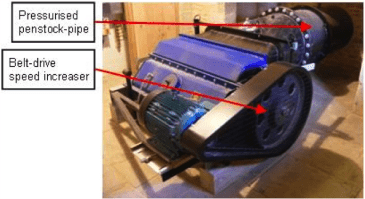 Low-speed, high-torque mechanical power from the turbine is changed to high-speed, low-torque power by increasing the speed using a belt-drive or a gearbox

The mechanical rotational energy produced by the hydro turbine is not much use to people nowadays, but historically would have been used to directly power mill stones to grind flour or looms to make cloth. Nowadays we want electricity, so normally the low-speed, high-torque mechanical power from the turbine is changed to high-speed, low-torque power by increasing the speed using a belt-drive or a gearbox.

The high-speed low-torque power is then used to drive a generator which converts the mechanical power from the turbine into useful electricity that we can all use. Depending on how the system is configured, the electricity could be used on-site instead of importing electricity from the grid, or it could be exported and sold to the grid, or often a combination of the two.