How much does a hydropower system cost to build?

It’s quite difficult to make generalisations about the cost to build hydro systems because of the different combinations of head (the change in water levels between the intake and discharge) and maximum flow rate, and how that affects the maximum power output and choice of turbine type.

Also the extent of any civil engineering works is very site dependent, with some new-build sites requiring everything to be built from scratch, while other retrofit projects can make use of and adapt the existing civil engineering structures.

Having said that, we’ll try to answer the question anyway to give you an idea of the ‘scale’ of costs involved. The table below is a rough ball-park estimate of typical project costs for systems requiring an ‘average’ amount of civil engineering works and grid connection upgrades and assuming access to the site was reasonable. In all cases it is assumed that good quality hardware is used throughout, which we would recommend anyway if you want a reliable hydro system in the long-term.

It is possible to install systems for a lower cost, particularly if the existing infrastructure at the site lends itself to easy adaption for a modern hydropower system so only modest or no civil engineering works would be needed. However even in the most favourable circumstances it is unlikely that the cost would reduce by more than 50% from that shown in the table.

To estimate the cost to build hydro systems for a maximum power output between the bands shown, use the chart below and read-off the appropriate £/kW figure – for example a 130 kW hydro system would be approximately
130kW x 4,800 £/kW = £624,000. 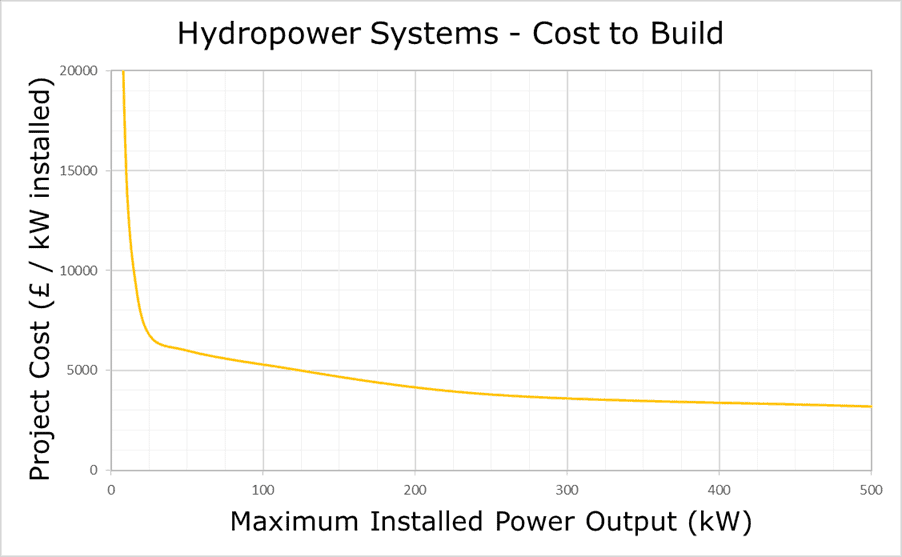 You’ll notice that very small hydropower systems are disproportionately expensive, and this is because hydro projects of any size have to include a substantial fixed-cost element at the design and consenting stages, and to a slightly lesser degree during the installation stage. This is why we generally advise people that to get an economically-viable hydropower system the maximum power output will have to be at least 25 kW, and preferably at least 50 kW. Smaller systems can make sense, particularly at sites with higher heads or if other intangible benefits, such as sustainability, environmental protection or publicity, are valued as much as return on investment.