How much does a hydropower system cost to operate?

The operating hydropower system cost varies depending on many factors, the main ones being the size of the system, the head and the type of turbine. If you want a quick idea of operational costs use the table below, or if you have a particular size of system you are interested in use the chart

Generally speaking, hydropower systems are reliable in the long-term. The biggest maintenance task is keeping the intake screen clear of debris, particularly during the autumn period or after heavy rain. Even outside of these periods it is a surprising just how much debris there is in flowing water. Smaller hydro systems up to around 25 kW can have manually-raked intake screens, though many owners still opt for automatic screen cleaning systems, such as the travelling screens manufactured by our sister company, GoFlo Screens. Larger systems will invariably have automatically-raked systems or in the case of high-head sites a self-cleaning coanda intake screen is often used. 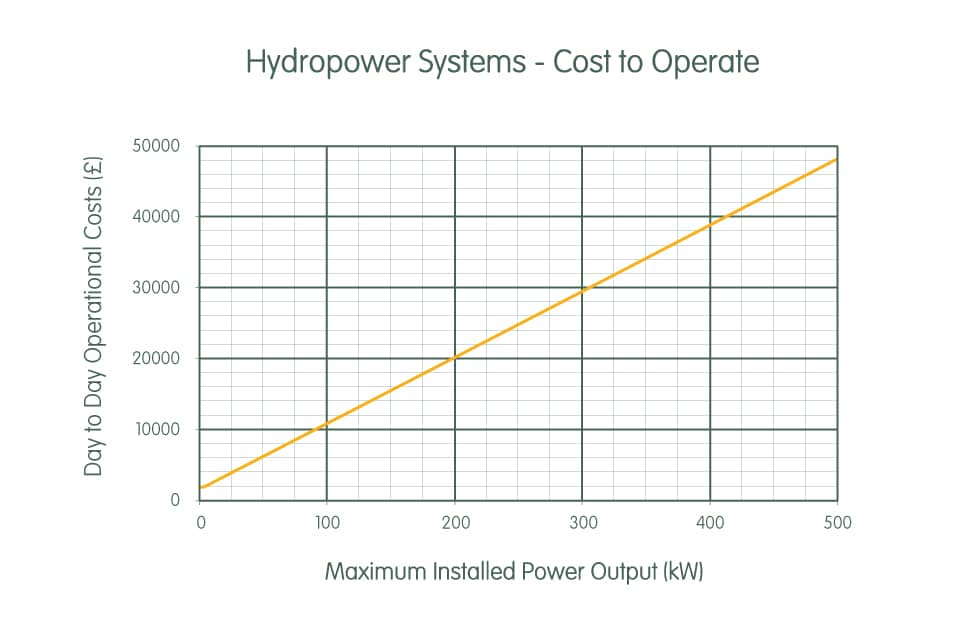 Archimedean screws are slightly different because they can operate with intake screens with a wide bar-spacing (up to 100 mm) which allows a lot of the small debris to pass straight through the system reducing the amount of screen cleaning required, though larger debris will still get caught on the screen and will need to be removed either manually or automatically.

It is also good practice to look-over a hydro site on a daily basis, or certainly a couple of times a week. This not only means that the intake screens will be checked, but would also give an early warning of any other issues before they become significant. Hydropower machinery is quite rugged and generally heavily built.

As hydro turbines are not subjected to shock loads like many other machines, they generally have very long operational lives of at least 40 years. Routine maintenance is monthly grease lubrication and hydraulic fluids are normally changed every two or three years. Drive belts (if fitted) normally last at least three years. Generator bearings should last 10 to 15 years and turbine bearings much longer because of the slower rotational speeds (on lower-head systems at least). As well as maintenance, the other hydropower system cost included in the estimates above are insurance and business rates. Business rates are a particularly complicated subject because they vary depending on where you are and the size of the system.
Back to Hydro Learning Centre