Pelton turbines are used on medium to high head hydropower sites with heads from 20 metres up to hundreds of metres.

Power outputs can range from a few kW up to tens of MW’s on the largest utility-scale Pelton systems. Because the operating head is high, the flow rate tends to be low, ranging from 5 litres/second on the smallest systems up to 1 m3/s on larger systems. The relatively low operating flow rate is not a problem because the terrain required to achieve the heads must be hilly or even mountainous, and these are typically high-up in a river catchment so the catchment area, and hence flow rate, is small.

In Figure 1 the penstock pipe delivers the water on the left-hand side. Before it enters the turbine it passes through the nozzle or spear-jet (a spear-jet being an adjustable nozzle). The spear-jet adjusts the flow rate through the turbine by moving back and forth which moves the head of the spear into and away from the nozzle, varying the flow area and therefore the flow rate. The position of the spear-jet is normally controlled by the system controller in response to changes in water level (hence flow rate in the river) at the intake.

The nozzle in a spear-jet is subjected to a constant high-pressure water flow and can erode over time, especially if there is a higher than normal concentration of abrasive sands in the water. For this reason it is normally made from tungsten carbide which is incredibly hard and able to resist erosion, and even then is designed to be easily replaceable during servicing.

Once through the spear-jet the water impinges on the rotor and transfers around 97% of its kinetic energy into the rotational energy of the rotor. To achieve this transfer of energy the buckets are precisely designed to minimise all losses. Firstly the ‘splitter’ splits the jet of water into two equal halves for each side of the bucket, then the shape of the bucket is carefully designed to turn the jet of water almost 180 degrees to transfer the kinetic energy with the minimal amount of splashing and leave just enough energy for the water jet to fully exit the rotor so that hardly any water hits the next bucket, causing drag. The surface of the buckets is normally highly polished to minimise drag and the rotor itself is finely balanced. The small ‘cut-out’ in the tip of the bucket is to ensure that the next bucket doesn’t cut through the jet of water on the previous bucket prematurely as the rotor rotates.

Once the water jet leaves the rotor it falls to bottom of the turbine casing and returns to the river through a discharge pipe.

To get a higher flow rate, hence more power through a single pelton rotor it is possible to have multiple spear-jets, as shown in Figure 3. Six jets is normally considered to be the maximum, and with this number of jets the turbine casing design becomes critical to ensure that the discharge water clears the rotor and can leave the rotor area without splashing around all over the place and causing excessive drag. 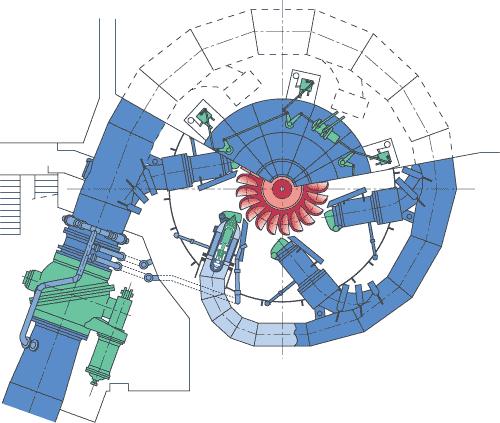 Pelton turbines rotate at relatively high speeds, so it is often possible to design them so that the optimum operating speed of the turbine and generator are the same so they can be directly coupled. This has the advantage of reducing the cost of the drive system because just a flexible coupling is required and saving all of the losses in the belt-drive or gearbox which can be between 2% to 7%.

Figures 5 below shows a Pelton turbine with twin spear-jets installed by Renewables First in 2007. This system has a maximum power output of 11 kW, so is a relatively small system. Figure 6 shows a large multi-megawatt system being installed (not by us), but gives a good idea of how large Pelton systems can be. This system has twin rotors and a directly-coupled generator shown in the right of the picture. 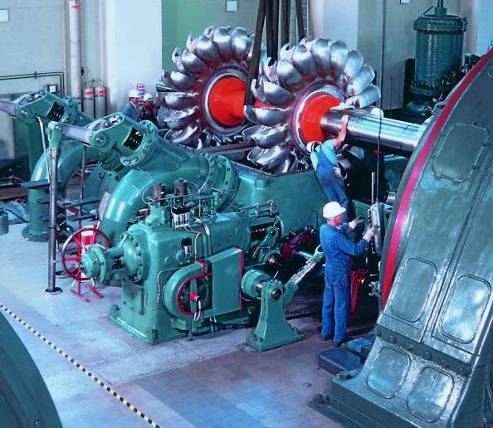 Turgo turbines were developed by Gilkes in 1919 and are a development of the Pelton turbine. They can handle a higher flow rate than a physically similar-sized Pelton turbine and the rotor is slightly cheaper to manufacture. In most other respects they are very similar to Peltons so the discussion above applies to both turbine types. In particular Turgo turbines use identical spear-jets to regulate the flow rate through the turbine. 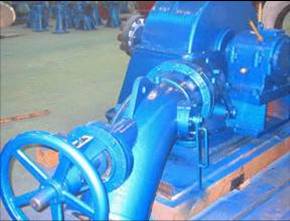 The main physical difference is that the water jet strikes one side of the rotor and exits from the opposite side, as shown in Figure 7. Note that this Turgo turbine is using a fixed jet as opposed to a spear-jet, so it will only operate on a fixed flow rate. Figure 8 shows a fully assembled Turgo turbine in its casing and the whole spear-jet assembly can be seen to be directing water onto the right-hand side of the rotor. 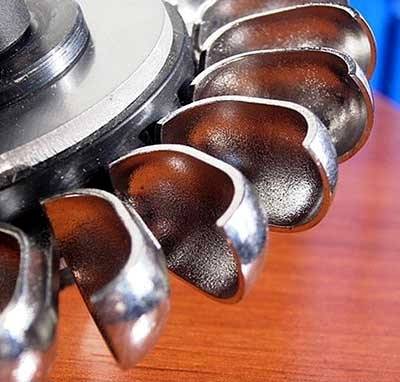 There are also several interesting ‘modular’ Turgo turbines available which are much loved by the DIY-end of the hydro market. The manufacturers produce individual buckets, either in nylon or stainless steel and these can be assembled by the maker into a rotor with a diameter to suite the head at the site. These DIY Turgos normally use fixed jets, but spear jets could also be used. A typical DIY Turgo turbine rotor with stainless–steel buckets is shown in Figure 9. 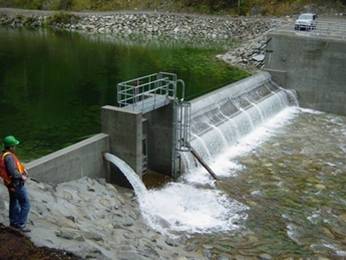 Not directly relevant in a turbine section of the website, but worth mentioning is that modern Pelton and Turgo turbine systems almost exclusively use coanda intake screens. These screens are built into the main channel so that the water flows over them, as shown in Figure 10. The screen has hundreds of tiny slots of around 1 to 2 mm wide that the water gets drawn through by the ‘coanda effect’. Coanda screens have the great advantage of being passively self-cleaning, because as debris builds up on the upper surface of the screen it is washed downstream by the water flowing over the screen. Due to the fine bar-spacing they also exclude all but the tiniest debris which ensures minimum wear on the turbine.