What is a Flow Duration Curve?

The Flow Duration Curve is one of the most fundamental pieces of information that feeds into the design of a hydropower project, so for anyone that wants to understand the how’s and why’s of hydropower design, understanding the flow duration curve is a good place to start.

The easiest way to understand the Flow Duration Curve is to construct one from scratch. Firstly let’s assume you have suitable equipment to measure the flow in a river for ten days. Each day you go out and record the flow and at the end of the period have a list of flow rates like this:

Although useful, this doesn’t really help much, and with any table of data it is often better represented as a graph. If the flow rates are plotted as a bar-chart, the result is called a hydrograph and shows how the flow rate varied over a period of time, as shown below. 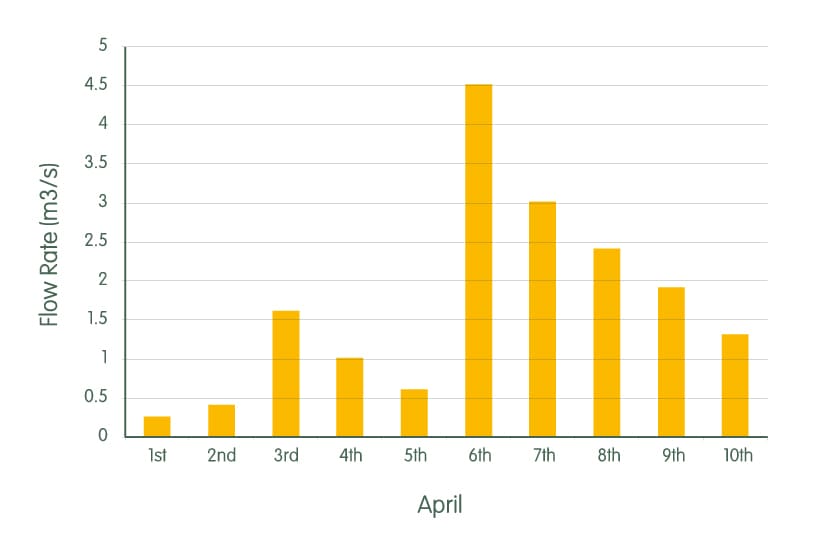 Although the hydrograph makes it easier to see the extremes of high and low flows, it is still quite difficult to see what happened in-between. For this you need a Flow Duration Curve.

To construct a Flow Duration Curve, rather than list the data in date order it is listed in order of the size of the flow rate, from highest to lowest. The data table would now look like this:

This data can then be plotted and a smoothed line drawn between each data point to produce the Flow Duration Curve shown below. 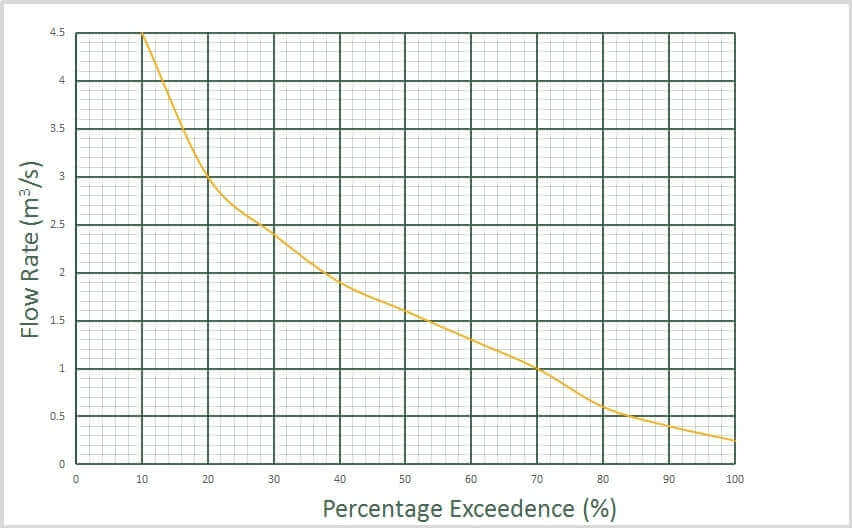 It is a strange concept but an important one to grasp. Flow rate is often referred to as ‘Q’, and the exceedence value as a subscript number, so Q95 means the flow rate equalled or exceeded for 95% of the time. Qmean is often discussed, and this is the average or mean flow rate, and is the arithmetic mean of all of the flow points in the data set (in our example this is 1.695 m3/s) and normally occurs between Q20 and Q40 on the FDC, depending on how ‘flashy’ or ‘steady’ the river being analysed is.

The example above is based on ten flow rates over a ten day period. In the ‘real world’ we would construct a FDC using thousands of data points measured over many years or even decades. It is important to use full-years of data to make sure you don’t have a wet winter period included without the corresponding dryer summer to balance the resulting FDC.

Flow rates between Q0 and Q10 are considered high flow rates, and Q0 to Q1 would be extreme flood events. It is important that hydropower systems are designed to cope with such extreme flows. Flows from Q10 to Q70 would be the ‘medium’ range of flows and you would want your hydropower system to operate efficiently right across these flow rates. Flow rates from Q70 to Q100 are the ‘low flows’ when hydropower systems will just be operating but at a low power output, and as you move further to the right on the FDC hydro systems will begin to shut down due to low flow. As flow rates move from Q95 towards Q100 you move into the low-flow draught flows.