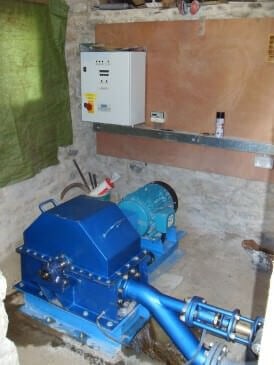 Located on the edge of the Dartmoor National Park, Bagtor House is a B&B with an environmental ethos. Historically, the house was equipped with had a hydro scheme originally installed in the 1920’s, which became derelict in the 1950’s. The newly installed hydro scheme comprises a Pelton turbine and more or less makes use of the same layout and infrastructure as the original scheme. This includes the turbine house, albeit in a state of disrepair, as well as the the original channel directing water away from the river into a tank at the top of the hill.

The site did provide some challenges. Being a high head scheme of some 65 metres, the HDPE pipework had to run through stony terrain which was ancient broadleaf woodland, which required sensitive and careful construction approach, in order to maintain the integrity of the woodland. There was also a relatively low water flow onsite, so minor modifications were made to concentrate more flow to the Pelton turbine. The scheme was also designed to integrate, where possible, into the infrastructure of the original hydro scheme.

With a simple design in mind, Western Renewable Energy specified a single jet Pelton turbine, making good use of the 65 metre drop in the level of the water. Water is directed to the Pelton turbine via a HDPE pipeline buried underneath the ancient woodlands. 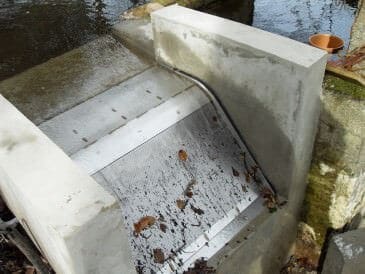 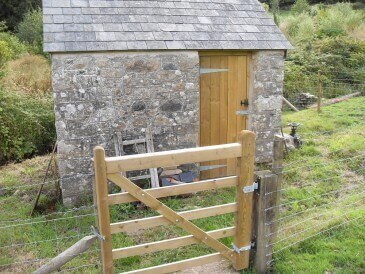 The new scheme partially reused the existing water intake, in that a new tank was constructed alongside it. A modern Coanda screen was installed in order to ensure low maintenance requirements. The Pelton turbine itself was installed into the old (albeit modified) powerhouse. The entire scheme is very simple, straightforward and reliable.

The Pelton turbine and generator are located in a shallow valley below the level of Bagtor House. Power is transmitted a short distance to the house via buried cables.  The system is grid connected and supplies the house. The energy capture more than matches the annual household usage. It therefore provides a supply of carbon free electricity to the house, as well as an income from electricity sold.