Although of fairly standard design, the original Powerwind turbine foundations differed from the norm in that they were slightly narrower and deeper than usual. This was due to the fact that they had to be squeezed in between two large chicken sheds, which somewhat limited the amount of ground surface area available. Nonetheless, the turbine foundations still cover a surface area of approximately 11 x 11 metres. 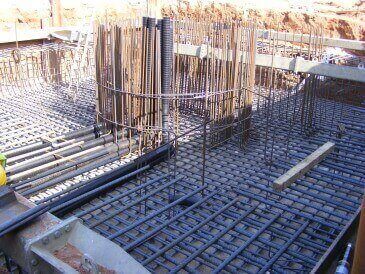 Assembling the rebar for the wind turbine foundations. 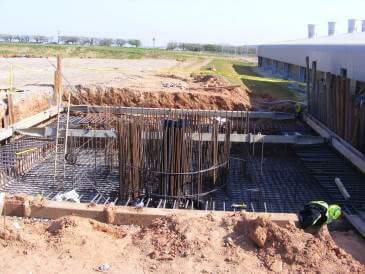 The photographs (left and right) show the earlier excavations of the Powerwind turbine foundations. The circle of vertical bars visible at the centre of the excavation are the studded rods which bolt to the tower lower flange.  Once the self-levelling grout was poured, this created a dead level flange surface to bolt onto (as shown below left). The picture below right shows the foundation with the formwork removed. 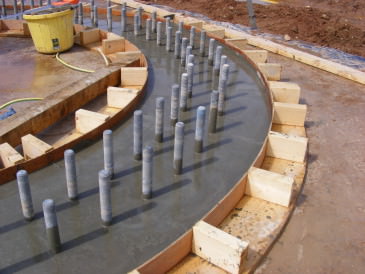 Grouting for the original Powerwind turbine foundations, before they went bust. 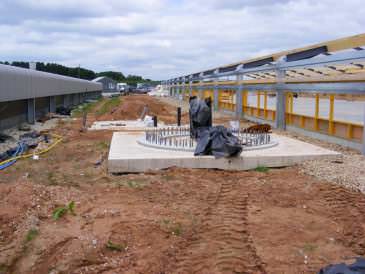 However – having completed the initial foundations for the Powerwind turbine, Powerwind then ceased trading. This meant that the completed Powerwind foundation then had to be adapted to accommodate a different turbine – in this instance, the first DW54 EWT 500 kW turbine that Renewables First has been involved with.

Although by no means a show stopper, this proved to be an expensive problem for the client, as well as an engineering challenge for Renewables First! Although physically the same size turbine, the design details with respect to how the Powerwind and EWT turbines connect to the foundation varies.

Thus a key engineering task was to successfully link (bond) the new EWT foundation with the Powerwind foundation. This was achieved by lots of drilling and resin-fixing of rebar. The end result was that the level of the reinforced concrete base onto which the foundation cam was embedded, had to be raised by roughly 1.5 metres. The photograph below shows the completed foundation.