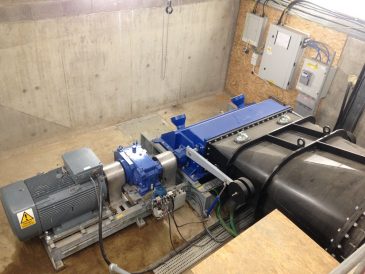 The Cochwillan hydro scheme comprises a 90 kW Crossflow hydro turbine, located on the Afon Ogwen on the Penrhyn Estate at Cochwillan, North Wales. The turbine exploits a net head of 8 metres and has a maximum flow rate of 1.59 cubic metres per second. The annual energy capture will be 487 MWh in an ‘average flow’ year. This is equivalent to powering 111 UK homes. The scheme will also produce an annual CO2 emissions saving of 243,642 kg.

The Cochwillan hydro scheme utilises a large GoFlo automated self-cleaning intake screen located at the water intake. GoFlo screens are fully automated and self-cleaning screens, with a rotating mesh that scoops debris out of the water and deposits it in a trough to be flushed downstream of the intake. The GoFlo self-cleaning screen system will significantly increase energy production and income from the Crossflow turbine, as well as considerably reducing the time spent removing screen blockages. Screen blockages and reduced flow are the primary cause of turbine downtime or poor performance at most hydro sites. For more information about the Cochwillan self-cleaning screens, visit the GoFlo Screens website. 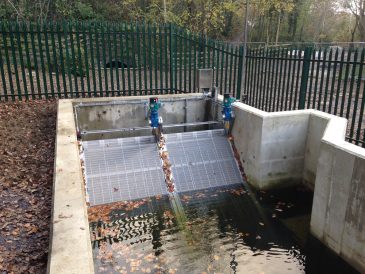 GoFlo self-cleaning screens at the Cochwillan hydro site, with fish bypass entrance to the right. 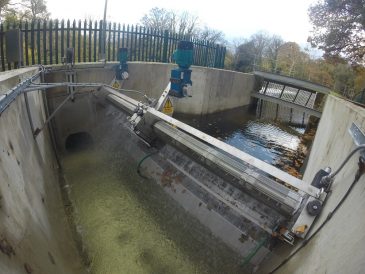 Debris collection trough and automated flushing sluice at the head of the GoFlo screen.

Another point of interest with the Cochwillan hydro scheme is that roughly mid-way between the GoFlo screen and the turbine house, the penstock pipes reaches a high point. This is because the layout of the hydro scheme spans two sites, separated by a dual carriageway, at which point the penstock enters a culvert. Within the culvert the penstock is located 0.8 metres higher than at the water inlet, with implications for flow to the turbine downstream. The design engineers at Renewables First had to work out a way of evacuating the air from the pipe in order to enable water to fill the pipe and to continue is journey down to the Crossflow turbine. This was achieved using vacuum pumps. The pumps use minimal amounts of energy and only activate when the turbine is fired up, in order to initially excavate air from the pipe, and then only if the vacuum degrades over time. This has the effect of siphoning the water through the penstock to the turbine. 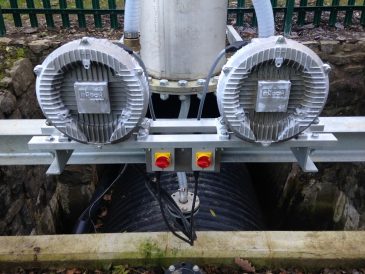 Vacuum pumps for the siphonic intake used at the Cochwillan hydro scheme. 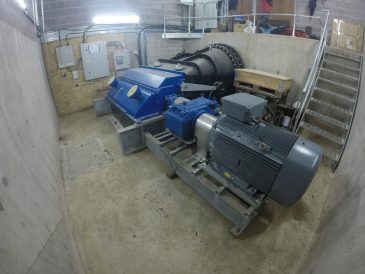 The skid-mounted Crossflow turbine, gearbox and generator at Cochwillan.

The Cochwillan hydro scheme was commissioned at the end of September 2016. It is owned and operated by Penrhyn Hydro Ltd, in the grounds of Penrhyn Castle.