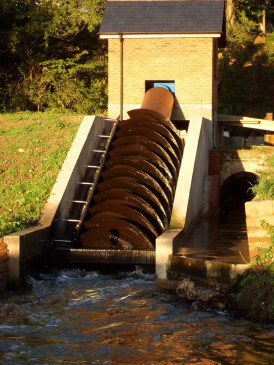 The clients motivation for this project was driven by a mixture of aspirations. These included a long-term family attachment to the Mill, an enthusiasm to ensure a continuity of use – from past, present and into the future – as well as environmental and financial objectives.

The project involved the installation of a 28 kW micro hydro Archimedes screw turbine in a small field adjoining the River Otter at Tipton Roller Mills. The power generated by the turbine will travel to the nearby Roller Mill via an underground cable. Any surplus power will be sold on to the National Grid.

The scheme involved repairing the intake at the weir, and diverting water down an existing, albeit freshly dredged, leat. Because the Archimedes Screw turbine could not be located on the weir itself, a new inclined channel was excavated just downstream of the weir, thus connecting the leat with the River Otter. The Archimedes screw turbine is located in this channel.

The hydro scheme is fairly compact, with a finished footprint of roughly 26m x 3.5m (91 m2), although the construction footprint (albeit temporary) was roughly three times this size. Given that the turbine is located roughly 150m from the mill, a buried cable carries electricity from the generator to the mill. The scheme also included the construction of a small turbine house for the control gear and equipment.

The image above shows Tipton Weir, with an approximate head (fall) of 2.6m. The Archimedes Screw could not be positioned on the weir, due to access issues. This is why a new channel had to be excavated between an existing leat and the River Otter – and the turbine exploits the height difference between the two.

One of the first project tasks was to undertake a fish rescue of the upper section of leat (below right). This is because it was necessary to temporarily “dry up” the top end of the leat – the section upstream of the Mill. Downstream of the Mill, the leat runs for another mile or so before rejoining the river. In order to keep the downstream (tail race) section of leat flowing, water was over pumped from the River Otter. This ensured that it remained full of water during the drier summer months. 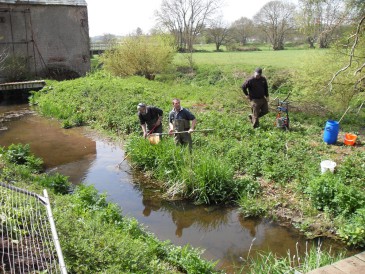 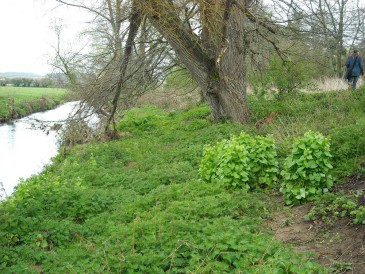 The image above left shows the site of the turbine location, alongside an old spillway (not visible) located between the leat and the River Otter. This particular site was chosen because it enabled relatively easy access for excavation and lifting equipment onto site.

Temporary vehicular access to the site was assisted by a makeshift bridge shown below. The image (below right) shows the leat being dredged back to its original depth and width. 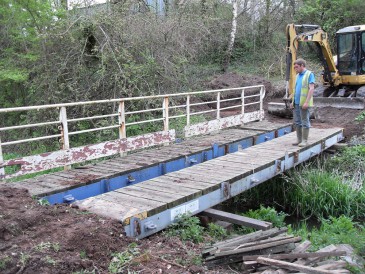 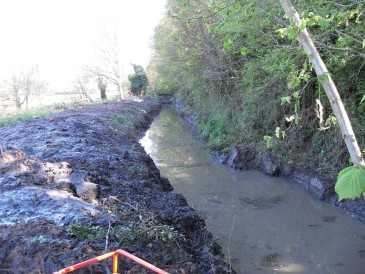 Excavations began by stripping off top soil beside old spill way shown below (left). Excavations proceeded down to below the level of the river (below right).  By stopping short of the river bank, no sheet piling was required. 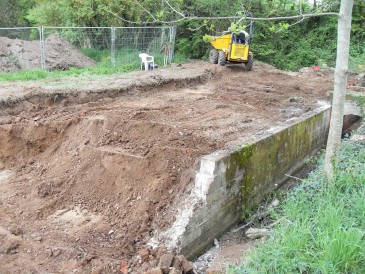 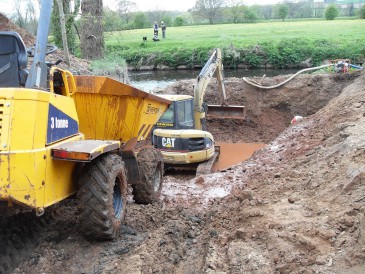 Once the excavations were complete, the concrete channel for the Archimedes screw was created in three large pours of concrete – essentially a base (below left) and two walls (below right). 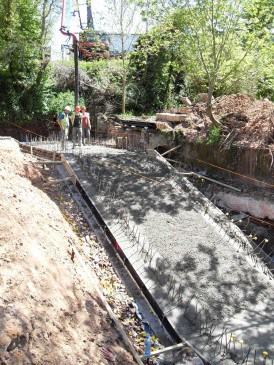 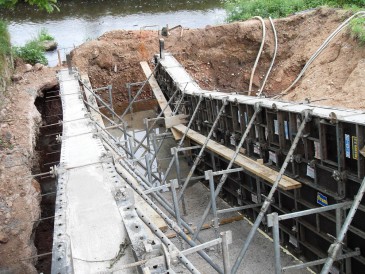 The completed structure is shown below (left), prior to the walls being back-filled – and of course prior to the Archimedes screw being installed. The shallow trench shown in the image below (right) is for buried cables, and runs roughly 150 metres from the generator to the grid connection point, completing the “water to wire” concept. In operation, the turbine will generate up to 28 kW, primarily for use in the Mill, with surplus power exported to the national grid. 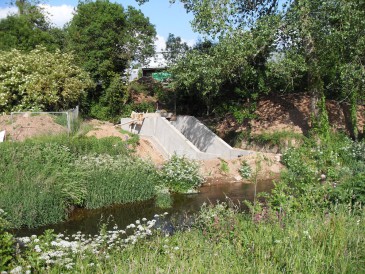 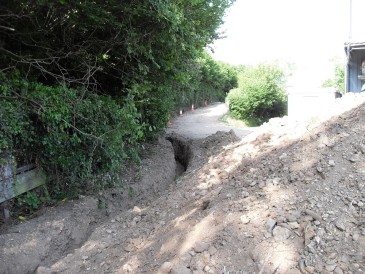 Further into the works, the image below (left) shows the sluice gate being installed. The image to the right shows the 28 kW Archimedes screw being crane lifted into position. The crane is visible in the background some 40 metres from the turbine channel. 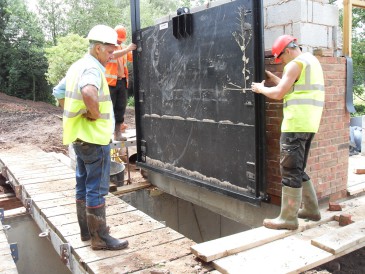 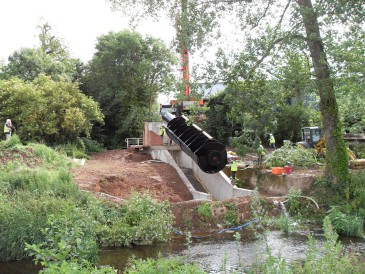 The scale of the turbine, albeit relatively small, can be seen below as it is hoisted into place. Once in operation, the screw will churn up to 1500 litres of water per second, and will exploit a head of around 2.6 metres. Working continuously, the screw will produce up to 28 kW of electricity. The image to the right shows an aerial view of the Archimedes screw. 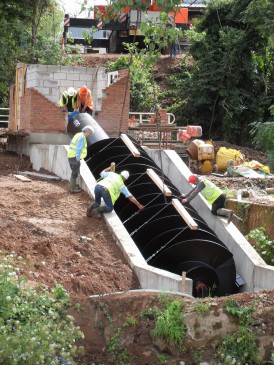 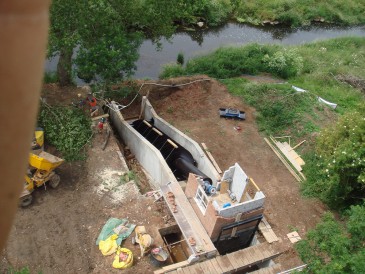 The Tipton Roller Mill hydro scheme is designed to be a straight forward system. It comprises a fixed speed machine and a simple, low-cost, low spec design – but is does everything that it needs to do. The images below show the Archimedes screw before and after installation. 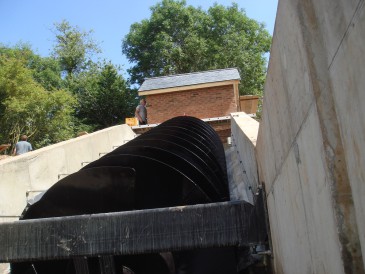 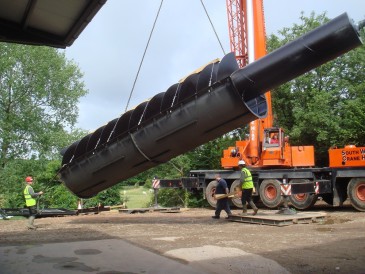 Once installed the site was reinstated and made good. A bridge for access was incorporated and a new spill way constructed alongside the powerhouse and turbine (below left). Safety guards were also installed and exposed soils seeded. 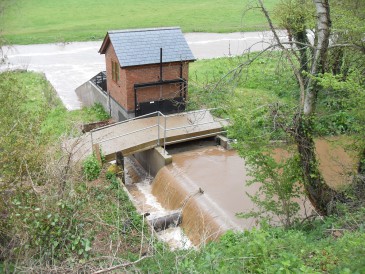 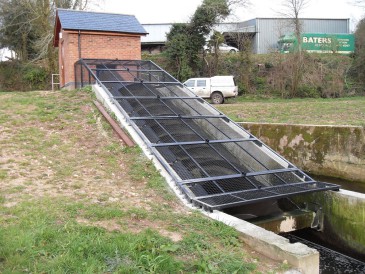 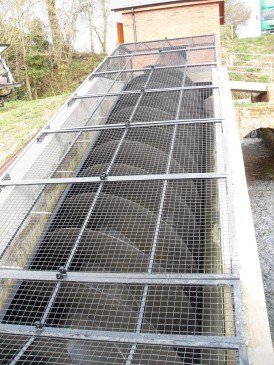 The Tipton Roller Mill hydro scheme was built during the spring – summer of 2010, and was commissioned and handed over in August 2010. The system has performed well and has an expected working life of at least 25 years.