The location of the Afon Gafr, Nant Peris hydro scheme in the summer.

The 350 KW Nant Peris hydro scheme on the Afon Gafr, is now fully operational and was commissioned before Christmas by one of the contractors working for Renewables First.

The entire build time for the Nant Peris hydro scheme took roughly 6 months, with some elements of construction being strongly influenced by the weather, particularly the trenching required for the 909 metre long penstock, which was hampered somewhat by heavy rain during the summer months, then later in the final few months. 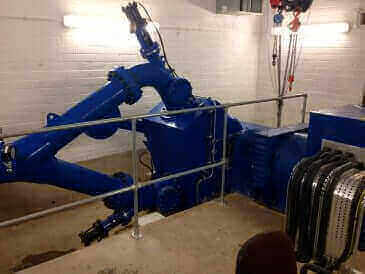 Inside the turbine house, the 350 KW Pelton turbine.

The substation house for the Nant Peris Hydro Scheme.

Now commissioned, the 350 KW Pelton turbine can now make good use of the copious amounts of rainfall and begin its long-term job of supplying electricity into the local grid network. 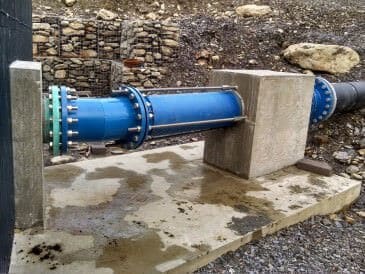 Anchor block at the base of the penstock near the turbine house.

Penstock passing through the anchor block.

The picture below shows the Afon Gafr in full winter spate. The intake for the hydro scheme is located at the top of the creek and is just out of view. The penstock snakes across the hillside to the right, as it begins its 909 metre long journey down to the turbine house, over a vertical drop of 212 metres.  The 350 KW Pelton turbine and generator converts the energy in the moving water (202 litres/second) to electricity. It is estimated that the scheme will generate around 1,100,000 kWh per year, equivalent to powering roughly 333 UK homes (based on a median UK consumption of 3300 kWh, EST 2012), as well as a carbon saving of around 473 tonnes per year.