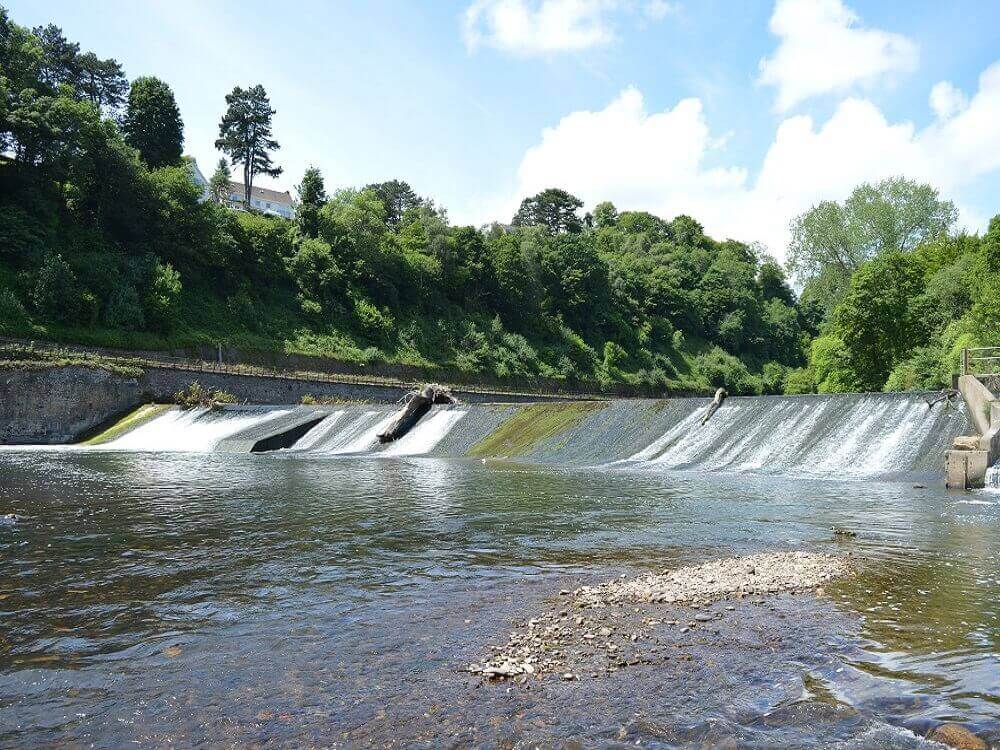 Renewables First was recently commissioned by Dawnus Construction to produce detailed designs for a hydropower scheme to be installed on the Radyr Weir, owned by Cardiff City Council.

Located on the river Taff, the Radyr Weir hydro scheme will comprise 2 x 200 kW Archimedes screw turbines, each roughly 3.5 m in diameter, with a total installed capacity of 400 kW. Situated on the eastern edge of the weir, the scheme will exploit a drop in height (head) of roughly 3.5 m and a mean flow of roughly 22 cubic metres per second. The annual energy yield is calculated to be in the region of 1.8 million kWh and will equate to an annual CO2 saving of around 785 tonnes. The structural design and installation works will be undertaken by Dawnus Construction, acting on behalf of Cardiff City Council. 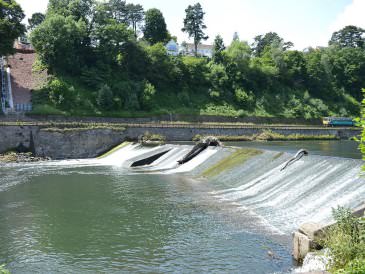 Radyr Weir hydro: view from the site of the planned Archimedes screws. 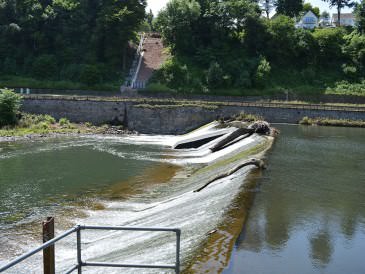 Radyr Weir hydro: looking across to the railway line on the opposite side of the river Taff.

The physical layout of the scheme will include a newly constructed inlet channel from the river, beginning just upstream of the weir, diverting water to the Archimedean screw assembly. The screws will be located on the east side of the weir adjacent to the existing fish pass. Given that the river Taff is an important migratory route for salmon, the Environmental Agency has stipulated that a new fish pass is constructed on the weir, and also that construction of the Radyr Weir hydro scheme must not obstruct upstream fish migration. In reality, this means that a temporary fish pass be installed during construction, as well as a new permanent fish pass.

At the time of writing, site clearance works have finished and a temporary fish pass has been installed, to replace the old one that is being demolished. One of the challenges with this project is that the Radyr Weir site is located relatively low down in the river catchment where rates of upstream salmon migration are high. Furthermore, construction works for the hydro scheme may coincide with the peak of the upstream migration of salmon. It is important, therefore, to install a temporary fish pass, because the existing fish pass needs to be demolished to accommodate the new one, due to site constraints, etc. The temporary pass being installed also includes a temporary fish trap. This is because there is also an ongoing fish monitoring scheme at the weir, capturing data on the fish that migrate up through the river Taff system. The temporary fish pass is a 20 flight Alaskan pass located on the weir itself, and that will be in operation for the duration of the construction works. 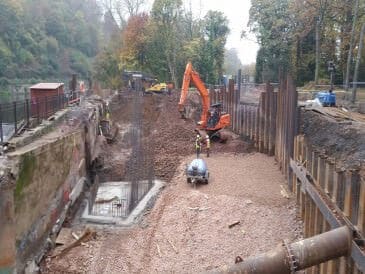 With the temporary fish pass installed, sheet piling works are well underway. Essentially there is a sheet pile “box” around the perimeter of the development. This provides a retaining wall on the landward side (this is because the development site is a relatively small site so needs retaining), then on the river side the piling is providing protection for the temporary works from the river water.

The turbines will be installed in November, with a target to commission the hydro plant in mid December.