How windy does it have to be?

Basically, the windier the better. 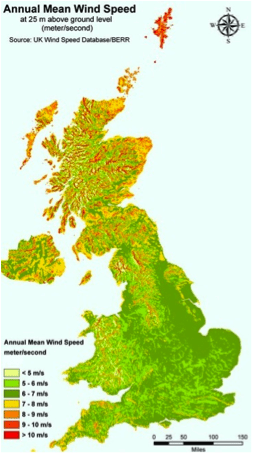 The amount of power generated by a wind turbine is proportional to the cube of the wind speed. This means that increasing the average wind speed from 6 m/s to 7 m/s results in 60% more power from the same turbine and an increase in annual energy production of 36%. This is why it is so important to get wind turbines sited in optimal locations with exposure to the strongest winds, which normally means on the tops of hills and on the tallest towers.

However, all is not lost if you don’t live in one of those areas. There are many localised areas with high wind speeds, typically on tops of hills or in flat open areas. They may be too small to appear on the map above but may still have high annual average wind speeds.
Also there is an increasing trend from wind turbine manufacturers to produce turbines with ‘oversize’ rotors. These are basically standard turbines that have a rotor attached that is up to 100% larger in swept area than the standard wind turbine. This allows the turbine to capture sufficient energy from a site that may have been overlooked for wind power a few years ago.

In summary, any site that has an annual average wind speed of 7 m/s or more would be considered excellent for farm wind turbines, and in fact many sites with as little as 5.5 m/s can still be viable when using some of the ‘oversized rotor’ wind turbines now available. If you have less than 5 m/s it almost certainly wouldn’t be economically viable to install a farm wind turbine.